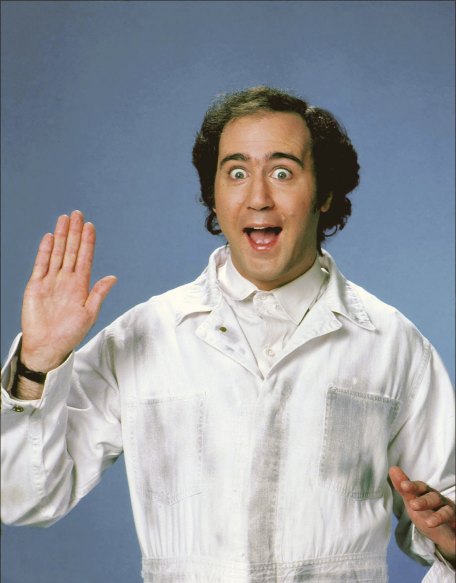 “Andy’s legacy is certainly one of the true artist who had the ultimate freedom to do whatever he wanted in art. He taught us to be true to your vision, no matter what. Nobody was freer than Andy Kaufman.” Bob Zmuda, Andy’s writer.

Most likely.  Actually, rumors that he faked his death rival those that Elvis is still alive somewhere.  Just last year, his writer and best buddy Bob Zmdua and former girlfriend Lynne Margulies published “Andy Kaufman: The Truth, Finally,” a book making this claim.  Bob explained, “When he died, 85 percent of the population believed he had faked his death.”

He was nowhere near as famous as Elvis, more of a cult comic than a popular legend.  So why does the mythology persist?  In part, he became sick and died very abruptly, a non-smoker with a very rare and deadly form of lung cancer.  His death was improbable, but most deaths at 35 are improbable.  Really, it’s the fact that he made a career out of lying, and lying really well.  He may be the greatest deadpan the world has ever or will ever see.

One of his final projects before his death was a straight-faced and utterly bizarre parody of “My Dinner with Andre,” entitled “My Breakfast with Blassie.”  You can watch it right now on youtube.  More on that later.  He faked an amateur wrestling career, in which he only wrestled women (and accordingly faked a showdown with wrestler Jerry “the King” Lawler).  This is well chronicled in his other faux documentary, “I’m From Hollywood,” which you can also watch right now.  And he often assumed an alter ego in his stand up shows.  Okay, go ahead and watch that too (this one is short).

His comedy was innovative, and not always particularly funny (funny wasn’t really the point).  Some of his well known performances include lip synching to the Mighty Mouse theme song, introducing Robin Williams as his grandmother to an audience at a show at Carnegie Hall, and impersonating Elvis as a foreigner from a fictional country.  On one occasion, he began to cry uncontrollably as an audience jeered at him, then proceeded to pull out a toy cap gun, go backstage, fire into the microphone and fall down with a loud thump.

So he built his persona on very straight-faced and sometimes questionably funny acts and stunts.  Faking his own death would probably be something he would do, if only he thought of it before he became sick (and who knows, maybe he did.  Believers are still waiting for a long overdue punchline to that one).  In fact, he did consider it, according to Bob Zmuda (of course, according to Zmuda, he also DID fake his own death): “Andy told Lynne he was gonna fake his death, and she asked, “How long are you gonna be gone for? A year? Two?” Andy said to Lynne, “If I was a little boy about it, it would be a year or two. If I was a man, it would be 30 years.”

Bob Zmuda recalls that he and Andy first met in 1974 in New York City at Budd Friedman’s Improv. They formed a partnership that lasted the length of Andy’s career. Early in Kaufman’s career, he opened for musicians, such as Barry Manilow and the Temptations.  As he became more successful, he accepted a role on the tv comedy Taxi, basically playing his “foreign man” standup character.

Taxi wasn’t his first television experience.  During college, Andy Kaufman wrote, produced, directed, and starred in his own program on a campus TV station. Even in college, however, Kaufman was no novice to performance art.  Andy began performing at age 8 at children’s birthday parties, in Long Island, where he spent his childhood.  He was born in New York City on January 17, 1949.

Andy Kaufman will be remembered for a long time by fans of comedy and performance art, for his bizarre performances, his fantastic lies, and possibly for faking his own death.  He probably won’t be remembered for his parody film, My Breakfast with Blassie. But it really is funny, in the way that Andy Kaufman’s work is funny anyhow, and worth devoting an interesting dinner to.  So here is a recipe for Andy’s order:

“I’ll have two eggs, scrambled, and a waffle with a lot of butter on the side.”

I chose Martha’s recipe because I adore her pancake recipe and use it regularly.  I’m not a waffle person, myself, but I trust her for delicious and simple breakfast foods.

1. Preheat waffle iron according to manufacturer’s instructions. In a large bowl, whisk flour, sugar, baking powder, and salt; set aside.

2. In a small bowl, whisk milk and eggs; pour over flour mixture, and whisk gently to combine (don’t overmix). Gently whisk in butter.

3. Following manufacturer’s instructions, cook waffles until deep brown and crisp. (For a standard waffle iron, pour a generous 1/2 cup of batter into center, spreading to within 1/2 inch of edges, and close; waffle will cook in 2 to 3 minutes.) Serve warm, with maple syrup and butter, as desired.

Don’t forget the butter on the side, and the large orange juice and coffee with a lot of cream, Kaufman-style.

Andy Kaufman: Why it’s time to celebrate the comic and bury the death hoax, Washington Post